A vampire and a werewolf who never fit in. A witch whose spells don’t always work as planned. And a mysterious new guy who’s hiding something. Together they will discover who they’re meant to be…

Hidden from the human world, Shadow Falls is a secret camp for teens with supernatural powers. But for four very different teens, it’s much more than just a camp-it’s where their destinies will unfold.

Independent and strong-willed Della Tsang didn’t believe in vampires…until she became one. Chase Tallman is the newest member of Shadow Falls, but what made him into the sexy, mysterious vampire he is today? And what led him to Della Tsang? For Miranda Kane, magic has always been something she’s struggled with-until she finally has a chance to prove herself a witch to be reckoned with. And for Fredericka Lakota, the one guy who challenges her the most will lead her to the life she’s always wanted.

C. C. Hunter’s New York Times bestselling Shadow Falls series captured hearts all over the world. Now available in print for the first time, these enchanting novellas will reveal a side of the camp that you’ve never seen before…and live in your heart forever.

**Received an ARC Review in exchange for and honest review**

Lately I haven’t been reading a lot of young adult books but I actually love reading books from this author. Now this book is a collection of all the Novellas in this series. I always love reading more from the Shadow Falls gang so I was so excited to read this book. Finally we have this book in print because I actually love have an original book with the entire collection of novellas.

Now the book starts off with the first novella of Della’s story. It is called Turned At Dark in that book we see or learn how Della actually become a vampire. We got to see a first glimpse of Della’s home life and what makes her tick. Saved At Sunrise will be the first mission Della went on for the FRU. The FRU is what we call the FBI in the supernatural world.  It has always been Della’s dream of joining the FRU and finally she gets a chance to do so but sadly she could not go alone. Burnett paired her off with Steve anyway I enjoyed seeing their partnership grow and over the moon that it started to grow into something more.

In the novella of Unbreakable we get to see the first glimpse of the very sexy and mysterious vampire, Chase. Here we learn how he became a vampire and how he knows so much of the reborn vampires. I for one always wondered how he knew so much about that. Della’s life was long before intertwined with Chases even before they met and trust me this story made me love Chase so much more. Spellbinder was now the first ever book or novella of Miranda and I really wish she would get her own full series or something. Anyway she goes to Paris for a top spot in a spell casting competition and Perry is also in Paris. She wants to see Perry again, she still loves him no matter what he said for her to move on. I just want them to get back together! What Miranda did not expect would happen to her when she went to Paris was being thrown into a supernatural mystery that the FRU tries to figure out. Miranda learns so much about herself and her family which I tell you was quite shocking. The last novella in this book is Fierce written about Fredericka. I always hated her in the Shadow Falls series but trust me this book changed the view I see her. I felt so bad for Fredericka and I was rooting for her to find some happiness. That ending I loved so much and I want to know where her story might take her.

I would easily reread this book and I really want so much more of this author. Maybe something like a series for Miranda. I want to see her having a happy ever after and then I also want more from Fredericka. This was a nice quick read and I enjoyed it immensely. I highly recommend this collection of novellas. 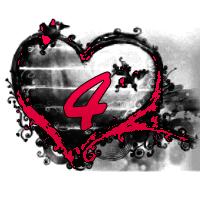 C.C. Hunter grew up in Alabama, where she caught lightning bugs, ran barefoot, and regularly rescued potential princes, in the form of Alabama bullfrogs, from her brothers. Today, she’s still fascinated with lightning bugs, mostly wears shoes, but has turned her focus to rescuing mammals. She now lives in Texas with her four rescued cats, one dog, and a prince of a husband, who for the record, is so not a frog. When she’s not writing, she’s reading, spending time with her family, or is shooting things-with a camera, not a gun.

C.C. would love to hear from you. Because of deadlines, it may take her a day or so to get back with you, but she will reply. cc@cchunterbooks.com

4 thoughts on “ARC Review for Almost Midnight by C.C. Hunter”