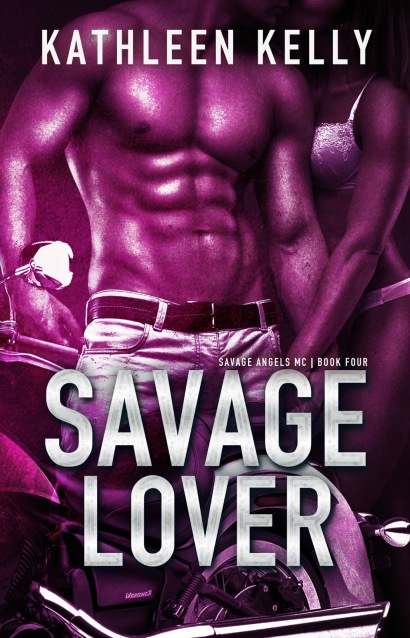 Title: Savage Lover
Series: Savage Angels MC #4
Author: Kathleen Kelly
Genre: MC/Contemporary/Erotic Romance
Release Date: March 31, 2016
Blurb
Kade Cantrill is a soldier, a nomad without a Chapter to call home. The Savage Angels MC have welcomed him to Tourmaline though he has never felt compelled to stay in one place for long. But that was before he met her. If there’s one person who can convince Kade to stay, it’s Destiny Bennett.

Minions of Death have a new leader, Adriel. Their numbers have increased and he’s going to take back all the business the Savage Angels stole from his club. Adriel intends to start a war and he doesn’t care who or what gets in his way. Least of all, Destiny.

Destiny Bennett has always attracted the bad boys and when she finds herself at the center of an MC war, Kade must act quickly to save her from the wrath of Adriel.

Will this Savage Lover expel his own demons to be the one Destiny needs to heal her brokenness? Or will Kade continue to allow his past to haunt him and extinguish any hope of a happily ever after?

Kathleen Kelly was born in Penrith, NSW, Australia. When she
was four her family moved to Brisbane, QLD, Australia. Although born in NSW she
considers herself a QUEENSLANDER!!
She married her childhood sweetheart and they live in
Brisbane with their two furry kids. A British Short Hair called Grace and a
Burmese called Jack.
Kathleen enjoys writing contemporary, romance novels with a
little bit of erotica. She draws her inspiration from family, friends and the
people around her. She can often be found in cafes writing and observing the
locals.

If you have any questions about her novels or
would like to ask Kathleen a question she can be contacted via e-mail: kathleenkellyauthor@gmail.com
or she can be found on Facebook.

One thought on “Release Blitz for Savage Lover by Kathleen Kelly”